The memorial arch erected to the memory of the thirteen missionaries of the American Board of Boston, who suffered matyrdom in China in 1900 was dedicated at Oberlin last week. Oberlin was selected as the place for this memorial because the majority of the missionaries were alumni of the college. The memorial is located on the. Oberlin College campus. The arch spans the walk, and through it each day passes the larger part of the student body of Oberlin College. The corner-stone was laid October 16, 1902.

The arch is a magnificent structure of buff Indiana limestone. The central arch has on either side a colonnade of six monoliths, extending out about fifty feet, terminating in heavy, square pillars, surmounted by bronze torches bearing electric lights. On each side of the archway, which is about ten feet wide by eighteen feet high, are placed two bronze tablets, illuminated at night by groups of incandescent electric lights, and containing the names of the martyred missionaries. 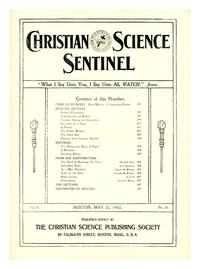