The right practice of any system of thought is inseparable...

The right practice of any system of thought is inseparable from the system itself. Whenever practice departs from the precise and accurately stated theorems of science, it ceases to be any part of that science, ceases at once to reflect or manifest the universal truths maintained by that science. For this reason it must be plain that Christian Science is to be judged by its fruits. If these are in accord with its fundamental philosophy, and its general influence is good, then certainly its practice cannot be called unscientific, and no charge of charlatanism will stand. What, then, are the fruits of Christian Science? This is the only sure test of its claims. A careful examination reveals the fact that the practice of Christian Science heals disease; removes physical, mental, moral, and financial discord; reforms, or transforms the individual; heals sin as surely as it cures sickness, and brings peace to the troubled and deranged human experience. There are too many men and women who have been healed through Christian Science to discredit it at this late date. Those who have come up out of great tribulation to the possession of a whole body and a healthy mind will never believe that Christian Science is mingled with charlatanism, or that its practice is unscientific. If our critic has ever come across charlatanism, he may be sure it is always charlatanism and never Christian Science. The two are elementary opposites. Christian Science, in other words, is not to be judged by what it is not, but by what it is, and what it is, is determined by the practical good it confers upon its adherents.

Send a comment to the editors
NEXT IN THIS ISSUE
Article
Christian Scientists in their practice, take for their standard... 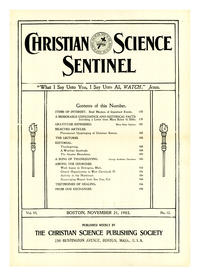