To the Editor of the Sentinel.

In answer to Rev. M. W. Plummer's attack upon Christian Science last Sunday evening as quoted in Monday's Record, I wish to say that Christian Science attacks no one, but, in all honesty, should defend itself when traducers assault its fortifications. It has pleased Mr. Plummer to use cheap sarcasm as argument (as quoted), a source never resorted to by any professional man unless he is without logical facts or substantial reasoning. Now as to a few recognized facts: Christian Science is not a fad, its members were not converted to its doctrines by oratory or excitement, but most of them were lifted from beds of pain and the depths of despair through the great principles of Christian Science as taught by Mrs. Eddy, and that after hearing their physician's verdict: "Past all human aid." I say to Mr. Plummer, Go ask some of the many thousands who have retraced their footsteps from the grave if Christian Science "is the most arrant and arrogant nonsense ever penned." It is plainly evident to any Christian Scientist that Mr. Plummer is totally blind and deaf to the great truths between the covers of "Science and Health with Key to the Scriptures." He may have eaten the words but he failed to assimilate their nutriment, and so fed upon husks. A man would have been called a crank or a fool but a few short months ago if he had prophesied that people would soon be talking hundreds of miles without any wires, yet it has come to pass. When John sent to Jesus to know if he were the Christ, the answer was, "Go tell John the blind see, the lame walk, and lepers are cleansed." That is the answer which Christian Science makes to the world with a record of over a million cases as I understand. Jesus did not use wordy argument to convince John that he was the one sent; he performed deeds before the gaze of a carping, jealous world. When he said preach the gospel, he also said heal the sick, and this was done for some three hundred years after his crucifixion. If he intended it only for his disciples or students, it would have disappeared with them instead of continuing for three centuries. Is it consistent for any one, especially a professor of Christianity, to tell God in prayer that He is All-powerful, All-love, and All-good, and reach out to the medicine tumbler for help in the same minute, thus admitting that they do not believe God to be as powerful as the doctor's prescription? 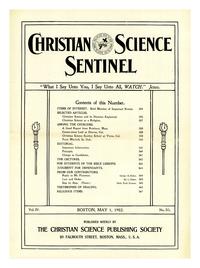