The great clock in the Naval Observatory at Washington, is called the Master clock. By means of the repeating apparatus the time is repeated over eighteen different circuits to the various parts of the country. New York City automatically repeats the time to all points east and north; Chicago and Cincinnati repeat to all points west and southwest; Richmond, Augusta, and Atlanta to all points south.

If you should happen to be in some large telegraph office at the moment the time signal is being sent out, it is likely you would see the operators at their keys take out their watches a few seconds before the time is due, open them, put a tiny piece of tissue paper twisted into a thread between the spokes of one of the little wheels in their watches, holding back the movement to the instant the signal is given, then releasing the wheel so that the watch shall fall into the exact beat of the Master clock in Washington. 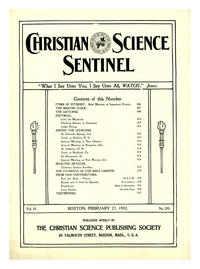