The Careful Use of Words

It has been said that the life of a Christian Scientist should be characterized by an uncommon amount of common sense. This common sense should lead to sound judgment, quick and clear perception of the needs of humanity and the way to meet them, and a wholesome perception of the eternal fitness of things. To this understanding add tact, and we have a Christian Scientist whose words and deeds will shine through the firmament of spiritual understanding into the hearts of benighted humanity with the steady light of a fixed star. The conversation of such an one will be clothed with the chaste garb of precision, and Love will so fashion his phraseology that the meaning thereof will be apparent to the dullest disciple or the un-instructed seeker. Then the injunction of the Master to "Feed my sheep" may be fulfilled, and in this every true Christian Scientist will rejoice.

The Wednesday evening meetings furnish an excellent opportunity to point out to the stranger within our gates what Christian Science can do and is doing for suffering humanity in all its needs. Many come there who know absolutely nothing about the teachings of Christian Science, and it is at these meetings, as well as elsewhere, that the greatest tact and discrimination in the choice of words should be used. If a stranger, seeking to know something about the healing in Christian Science, hears case after case spoken of as this or that belief being healed by treatment, without a definition of the terms used, he may go home wondering what manner of thing this mysterious treatment is which heals the beliefs that so grievously afflict the speakers. Perhaps not knowing just what may be meant by the word "treatment," he consults his dictionary and there learns that the word means a number of things. He finds that, with reference to disease, it means, "To manage in the application of remedies." He learns that in chemistry various substances are treated by acids and other chemicals. The miner treats his ores, the writer his subject, the photographer his negatives. There is no definite idea in his thoughts whatever, and, what is most to be regretted, the unqualified and indiscriminate use of the word does not bring God to his thought at all. He does not comprehend that God had anything to do with the "treatment," and here he misses the cardinal point of the discourse. All ambiguity could easily be avoided by occasionally substituting the word prayer, for every person knows that an effectual prayer implies the action of God on humanity. It should be explained that the prayer of the Christian Scientist is not a blind or unreasoning appeal to a personal God, and that his treatment consists in the "fervent and effectual prayer" of righteous understanding, by which the sick are healed and sinners reclaimed. This would furnish a basis for intelligent research, for the hearer would at once realize that he was dealing with something more than a human theory. These remarks are made with reference to the effect of testimonials on strangers, for, of course, Christian Scientists already know that every honest treatment is a prayer in the highest sense of the word. Too much care cannot be used to make it plain to the hearers that Christian Science is not a human system of metaphysics, but a divine revelation and a mode of regeneration wherein God is All-in-all. The tendency of the age is to place the healing on a basis of mortal mind, and this should be studiously guarded against. 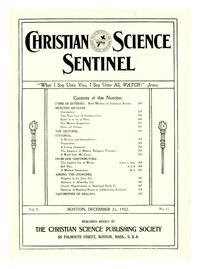