Unto Whomsoever Much is Given

Unto Whomsoever Much is Given

It is said of a late Englishman, that while a man of unusual breadth of learning, even among England's legions of the erudite, he was strikingly unlike most scholarly men in what may be termed the wasteful hoarding of his knowledge, a lifelong habit of reserve in expression having made him a somewhat remarkable example of the "reticence of learning." Unusual resources were at his command for he was a child of many schools, was traveled, and the owner of a private library of over one hundred thousand volumes ; but while constantly absorbed in the quest of new information his life was singularly unproductive, and his vast learning passed away with him.

With less eminent people it very often happens that a laudable ambition to acquire, to gain for their own good, is apparently wanting its true counterpart, the productive impulse, an impelling desire to give out to others; and the unhappy divorce of these normal associates has marred the usefulness, and consequent satisfaction and growth of many lives. 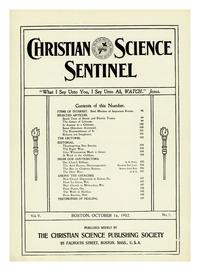