Healed by Christian Science after Operation had Failed

In September, 1898, my physician said I must have an operation performed to relieve a trouble from which I was suffering, and the sooner the better. Thinking that possibly he might be mistaken as to his opinion of the case, I consulted most of the prominent physicians here, but they all, with one exception, pronounced it a cancer, and advised an operation at once. As this one visited the prominent hospitals in Europe every two years, I concluded to try some new French remedy which he said would help me if anything could be done without a knife.

He treated me until the following July, when he and several other physicians decided that an operation was the only thing that would save my life. This was very discouraging to me after doctoring so long. I had the operation the seventh of July. For four weeks I was very sick at the hospital, and for several days it was thought I could not live. However, at the end of four weeks I was well enough to be moved to my home. For several months I suffered a great deal. 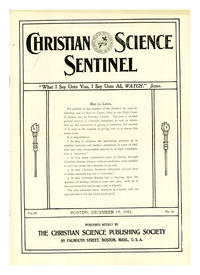