It has been some time in my consciousness that a tribute of gratitude was due Christian Science for what it has done for me. In reading the Sentinel of August 31, a statement was made on this line which confirmed me in my oft-put-aside idea of sending in my testimony to the power of Truth. It is almost two years since I first heard of Christian Science through the almost raising from the dead of one sentenced by materia medica to pass on in three weeks. A well-beloved member of my family was ill at that time, and I, on her account, stood facing a very dark, dismal winter, as for many years she had "suffered many things of many physicians," and was simply patched up, never "made every whit whole." The thought came to me, Could Christian Science do anything for me? I sought a relative who I felt might aid me, and with much assurance she said it was for every one and certainly she would be benefited. I was not seeking this "pearl of great price" at that time for myself, as my physical ailments were very few. I had always been strong and well and, although far from satisfied on the spiritual lines, I never thought of the awakening in store for me.

For twenty years of my life, I had been a member and active worker in the largest Presbyterian Church in New York City, and, although its doctrines were the best I knew, they afforded me but little real peace and I was most dissatisfied and always longing for answers to many questions, and the only answers I could ever get to what troubled me so, was, "God's ways are not as our ways;" "You will know some day." To wait until death opened up the vista seemed poor consolation, for then I felt there would be no necessity to know. In this spirit of mental unrest, I attended for one year an Episcopal Church, but here I became more heart-hungry than before, and again turned to another Presbyterian Church for two months, when, as I said before, ostensibly for the invalid member of the family, I sought one day a Christian Science reading room. I never can forget that day. The moment I entered that room, it seemed to me I was in a different atmosphere from any I had ever been in before, and it seemed even then, that with the flood tides of sunshine pouring in there were also flood tides of Love. I was introduced to several of the bright-faced women present, and although they said some things I did not understand which seemed to be in a "new tongue," I realized they had something that I had not, and I soon found myself again going down there to find out what this was, and if it was for me too. 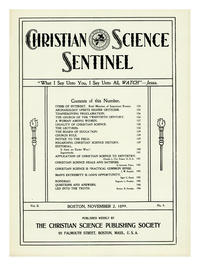