"When one is sick, why do you say, 'It is only a belief?" This often-asked question has an answer in the following incident, told by a New York Scientist.

While playing lawn-tennis, a young woman was hit in the face by a tennis-ball. After recovering from her confusion, she found that her two front teeth, supplied to her by the dentist and set in gold, were gone. She quickly arrived at the conclusion that she had swallowed her teeth, and that her life was in danger. 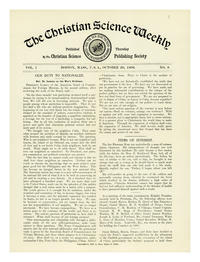