The practicality of God’s supply

The human economy with its law of demand and supply—its fluctuating stock market figures, inflation, and interest rates—may not be readily understood by all of us. Yet, its impact is seen in the rising cost of food, soaring petrol prices, unaffordable homes, pricey child-care, unsustainable inflation, and predictions of looming recession. This is felt in very personal ways. People’s fears and frustrations are captured by the phrase “trying to make ends meet,” which paints a picture of the ends of two ropes or lines being determinedly moved in opposite directions, while we strive unsuccessfully to pull them together.

A Bible story shows that this is not a new problem. There was hyperinflation in Samaria, which had resulted in a famine of unimaginable proportions. Yet, when the king, in his anger and frustration, came to Elisha, God’s prophet, demanding a solution, the human picture changed from lack to abundance overnight (see II Kings 6:24—7:16). The Bible’s explanation of how this turnaround came about could leave the reader to presume that maybe this was miraculous—a once-in-a-lifetime, inexplicable divine event, without rhyme or reason. But there is actually a Science to such occurrences that proves they can be experienced regularly and practically today.

The Discoverer of Christian Science, Mary Baker Eddy, found that there are spiritual laws that truly govern us where material laws appear to hold sway. This applies even to the human laws of economics. She writes in her seminal book, Science and Health with Key to the Scriptures, “The miracle introduces no disorder, but unfolds the primal order, establishing the Science of God’s unchangeable law” (p. 135).

God’s supply is not dependent on human laws of economics.

When seeking a solution to challenging economic times, then, we can choose to start from a radically different premise than that which underlies what we hear about in the news media. Rather than accepting a material model whose limitations are metaphorically represented by the end of a line, we can base our premise on the spiritual model whose symbol is the boundlessness of a circle. Science and Health uses the analogy of lines and circles to explain this difference between the finite and the infinite, viz.: “The circle represents the infinite without beginning or end; the straight line represents the finite, which has both beginning and end” (p. 282).

The spiritual premise, then, does not start with incessant demands overwhelming limited supply. Rather, it starts with God’s spiritual law of abundant supply, already in place for everyone, fully meeting every human need. The divine Science that Jesus proved so definitively undergirds the spiritual law of supply and demand. Understanding this law, Jesus urges us not to worry about our daily provision, saying: “Your heavenly Father knoweth that ye have need of all these things. But seek ye first the kingdom of God, and his righteousness; and all these things shall be added unto you” (Matthew 6:32, 33).

As we understand to some degree this scientific, spiritual law, it can begin to silence the fears that there are excessive demands on limited resources, which may then affect us negatively. Turning to God in prayer, we can recognize the spiritual laws that govern the divine economy—the real economy—as also governing our individual experience. The realization that our source of supply is actually infinite and spiritual, can bring resolution to financial and economic problems in surprisingly practical ways.

Years ago, my family faced a crucial financial deadline. With no human solution in sight, it seemed that only a so-called miracle could resolve the situation. Yet, having so often proved that the Science of the spiritual law is reliable and trustworthy, I turned to God in prayer. I felt reassured that there can be no lack in the kingdom of heaven—the harmonious, divine reality of being, which is not full of limitation and struggle and not at the mercy of inflation, stock markets, etc. This replaced my worrisome thoughts with an indescribable peace. Following this spiritual breakthrough, and just before the deadline, the company I worked for promoted me two steps higher, and promptly paid arrears associated with this double promotion.

This meeting of my need is an example of the spiritual law of God’s goodness governing the human situation, as it can in every case. The way that the situation in Samaria changed overnight might seem dramatic, but it shows what kind of a turnaround is possible when we seek first the kingdom—start from the spiritual premise of God, Spirit, as the unending basis of needed supply—and recognize that the divine economy and its laws are the only economy.

Praying to recognize and demonstrate this economy does not mean ignoring a situation or trying to wish it away, nor does it mean pursuing material wealth through spiritual means. Rather, it brings the assurance that we never need to give in to despair or worry. God’s supply is not dependent on human laws of economics, and this can be practically proved by each of us today.

Send a comment to the editors
NEXT IN THIS ISSUE
KEEPING WATCH
Is prayer about getting what we want? 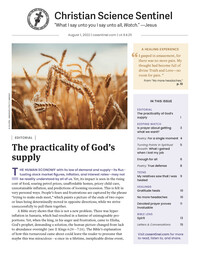