When I returned home from church one Sunday several years ago, my dog, Major, didn’t want to get up and go outside—strange behavior for him. At first, I thought he might be enjoying some extra rest, but by the end of the day he seemed unable to move from his bed.

Major had experienced many healings in Christian Science—complete recoveries after being hit by a car, chewing on batteries, and eating a lightbulb, to name just a few—so it was natural for me to turn to Christian Science for the solution in this instance as well.

I called a Christian Science practitioner to pray with me, and we quickly set to work understanding Major’s indestructible and uninterrupted identity as an expression of divine Life, God. One helpful idea was from the Gospel of John, where Jesus heals a lame man at the pool of Bethesda. I was particularly moved by the Master’s question to the man, “Wilt thou be made whole?” (5:6). In a way, it seemed to me that Major might have actually had the ability to move, but simply didn’t want to. So, Jesus’ question made me think about willingness. I knew it was completely natural for Major to want to move normally, so I answered Jesus’ question in the affirmative as it applied to Major.

Despite continued prayer, the situation didn’t change immediately. The third day, when I came home during my lunch break to check on him and see if he wanted to go outside, he still wasn’t able to move on his own. I talked with the practitioner and then carried Major downstairs to give him an opportunity to go outside. He didn’t move or do anything, so I carried him back upstairs, feeling somewhat frustrated and disheartened about the situation.

One of the things that I’ve been particularly grateful for about my time with Major is how much I learned from him, especially through recognizing aspects of my thinking that could be addressed and improved through prayer. As a result, I have had many healing revelations over the years. Sitting on the couch in that difficult moment, wondering where Major’s courage was—essentially asking him, “Are you willing to be healed?”—I turned the question on myself and examined my own thinking. This prompted a recognition of my needing to be more willing.

Over the past few weeks, concerns about new aspects of my work and life had been causing me to doubt whether I could accomplish endeavors I’d undertaken. Now these doubts were quickly dispelled by affirming the unchanging nature of my relation to God. I found myself being immensely grateful for the examples of Jesus and of Mary Baker Eddy, the Discoverer and Founder of Christian Science. I was inspired by their ability to listen for and be obedient to God’s instructions in fulfilling their individual missions, trusting in God to accomplish their work. I knew that I could exercise that same trust, following their examples in seeing, understanding, and fulfilling God’s will in each aspect of my life.

I carried Major downstairs again, even though the trip just five minutes earlier had seemed fruitless. Once outside, Major immediately trotted around as if there was nothing wrong. Within a day, there was no evidence of any problem, physical or otherwise, and Major was back to his active, playful self.

My new steps in work and life soon proved to be fruitful and enriching—a wonderful confirmation that the blessings of turning to God in prayer weren’t just for Major, but for me as well. I continue to be grateful for his healing and for the examples and explanations we have in the Bible and Mrs. Eddy’s writings. 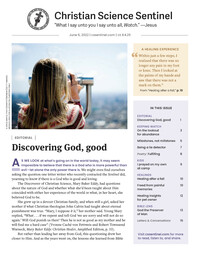