At the beginning of last year, my little dog, Katie, began to limp badly on our walks. I took her to the veterinarian, who took X-rays of her front paws and showed me the deterioration that he said had been caused by age. (Katie is considered quite a senior dog.) The vet prescribed some medication for the pain.

Well, the medication did not help. After a few days, Katie padded into the room where I was sitting and stared at me as if to say, “Enough of this. Call a Christian Science practitioner.” Katie has previously had healings through prayer in Christian Science.

So, I tossed out the medication and called a practitioner. After I explained the problem, the first thing she said was, “Bones have only the substance of thought which forms them.” This is from page 423 of Science and Health with Key to the Scriptures by Mary Baker Eddy.

I realized that this condition was all in thought. I had been so impressed by the X-rays that I had unwittingly accepted the notion that my dog had a disability. Now I began praying by rejecting the false belief that matter has any intelligence or power to impact an idea of God, divine Love. I realized that I had to get out of the way of Katie’s healing by earnestly refuting the evidence of the physical senses and, more importantly, by becoming more conscious of her real, spiritual identity.

I prayed with this statement from Science and Health: “A spiritual idea has not a single element of error, and this truth removes properly whatever is offensive” (p. 463). I consistently endeavored to see Katie’s true identity as a spiritual idea, and that as such she was free from any offensive element that would impede her normal activity—that she was whole, active, and perfect.

After a few weeks, even though still limping, she started to exhibit little spurts of joy that I had not seen in a long time. The practitioner and I continued praying, and a few weeks later the limp was gone. All four paws were normal; Katie walked and ran with complete freedom. And those bursts of joy continued and grew.

As I rejoiced with the practitioner, I told her that there had been a “bonus” healing as well. Prior to this, Katie seemed to have lost her hearing. But now she could hear commands, as well as the sound of the treat jar opening—from across the room!

One thought that the practitioner shared with me that I found particularly reassuring was, “God is looking after Katie.” Not me, not the vet, not even the practitioner. It was all God. 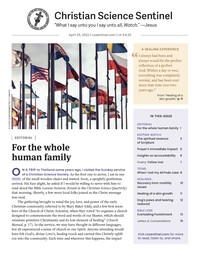