Remember getting a whole new view of arithmetic as a child. My teacher told us about negative numbers and said that there are as many numbers less than zero as there are greater than zero. Initially, that made no sense to me. However, with continued study and application, I eventually realized that this was indeed the case. And with this realization came a seismic shift in my understanding of the extensive world of mathematics.

An even more significant shift in thought happened while I was attending Christian Science Sunday School when I was 18. The class explored a distinction between the names “Christ” and “Jesus.” I was already familiar with Jesus the individual and many of his inspired teachings, and that day I learned more about Christ. This statement from Science and Health with Key to the Scriptures by Mary Baker Eddy points to the idea that dawned on me: “. . . Christ is not a name so much as the divine title of Jesus. Christ expresses God’s spiritual, eternal nature” (p. 333). I glimpsed that the divine nature expressed by the Christ had always been present. 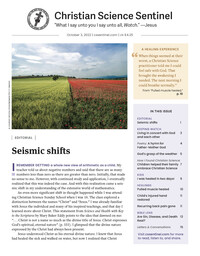