A little over a year ago I accepted a job in a university town in another part of the country. Over the next couple of days after accepting the job, I heard commercials describing the risks and symptoms of a certain illness. I immediately responded in prayer, denying that this could be true in divine reality, because God doesn’t create sickness. I persisted, to a degree, in claiming the unchanging harmony of my true, spiritual identity as God’s child.

When I began to experience aggressive symptoms, I was tempted to condemn myself, feeling I could have been more alert to these suggestions of illness. However, I quickly overcame this false notion that I was at fault, and decided that I could instead stand firm with Christ, Truth, as Jesus demonstrated in healing the sick. 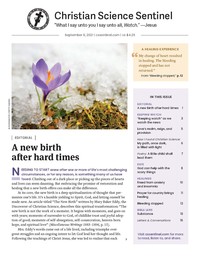