Several years ago, I often felt quite anxious to the point of finding it difficult to breathe. The first time I felt this sensation, which was accompanied by dizziness, I called a friend and asked if she could visit me, as I did not want to be alone. She came right away and spoke to me of God’s ever-presence and my oneness with Him. She also spoke about my spiritual identity as the expression of God, reflecting stability, completeness, spiritual substance—all the infinite qualities and attributes of Spirit, God. She stayed with me until I wasn’t afraid to be alone.

During the next couple of months, this friend and her husband came over several times on the weekends to read to me from the Christian Science periodicals.

Up to that point I had only occasionally called a Christian Science practitioner for spiritual treatment. But when the anxiety increased, I asked for help once or twice a week, and then daily. The practitioner and I would talk during the day, and again briefly in the latter part of the evening because of the intensity of the symptoms at night. She would speak to me of God’s peace, assuring me that it couldn’t be taken away from me. This verse for little children, written by Mary Baker Eddy, was a prayer we would say together in the evenings. It reminded me before I went to sleep that I was God’s child and that I could let Him take care of me:

Father-Mother God,
Loving me,—
Guard me when I sleep;
Guide my little feet
Up to Thee.

My dad had passed away a couple of months before this anxiety began. I had been spending several hours of my day visiting with him and doing activities together, but now my days were spent alone, fixing up the house I had inherited from him. This and other family challenges seemed to increase the anxiety, and the practitioner and I would talk about God’s lovingkindness toward me and all, affirming that I wasn’t alone in this work—that it was being done with God. We also talked about the fact that I was expressing lovingkindness toward others (my neighbors) by taking care of the house. I knew that God is ever present, all-knowing, and the only cause, and I began to see the work on the house as an opportunity to listen for God’s, divine Mind’s, guidance.

One night I was awakened by the thought “No evil shall befall thee”—which I recognized as based on Psalms 91:10 in the Bible. I thought more about this, replacing the word evil with “sin, disease, death, limitation”—none of which are our fate. The rest of the verse reads, “neither shall any plague come nigh thy dwelling.” This is the first of what I considered to be angel messages from God that came to me. I pondered that verse many times as I worked through different fearful thoughts. Still, the anxiety attacks would come every couple of weeks.

One day the practitioner asked if I knew about a Christian Science care facility in my state where I could visit for rest and spiritual study. I did, and although I was hesitant about the distance I would have to travel, one day I knew it was time to go. I packed my car and drove several hundred miles to this facility. While I was there, I read Science and Health with Key to the Scriptures by Mrs. Eddy from cover to cover.

After a few months, I felt at peace, and the breathing difficulty didn’t return. I felt able to pass the evenings without calling the practitioner and to pray on my own, and I returned home. The complete healing of anxiety came about a year later, and I was so grateful for the steady progress in between. During this time, whenever I felt the need for further metaphysical support, I would call a Christian Science practitioner for treatment, and on two occasions I took a few weeks off again for rest and study.

It has been almost five years since my dad passed, and I’m grateful for a continued sense of peace, for divine Mind’s guidance through the seemingly endless repair work on my house, and for the loving support given to me by other Christian Scientists. I continue to work on the house, gutting and renovating rooms, replacing windows, and doing all sorts of yardwork, knowing that “whatever it is your duty to do, you can do without harm to yourself” (Science and Health, p. 385 ).

I’m also grateful for the spiritual growth from my study of Christian Science over the last several months. Last year I finished reading Science and Health through for the third time, and I am reading it again. I have also been able to regularly read and subscribe to the Christian Science periodicals, as every member of The Mother Church has the duty and privilege to do.

I have much to be grateful for. 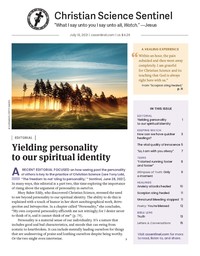