Politics as a forum for friendship

Mary Baker Eddy, the founder of this magazine, had great confidence in the ability of a higher humanity to draw us together.

About a year ago I came across an astounding idea relative to politics. It was in a speech given by Václav Havel, a leading figure in the “Velvet Revolution” that propelled Czechoslovakia to independence from the Soviet Union in the 1990s. Havel, serving as the newly liberated country’s president, suggested that politics should be a forum for the practice of friendship.

Politics a forum for friendship? Is that even possible? 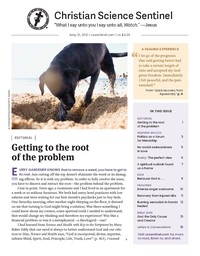