Halting the flood of images

The spiritual image is the only one we are to take seriously.

Billions of images are uploaded each day on social media; on networks in companies, institutions, and churches; among families and friends; and in circles small and large. Two studies published in 2019 reported that 3.2 billion images and 720,000 hours of video were being shared every day. As unimaginable as these numbers seem, they are potentially exceeded by the images that are “uploaded” into human consciousness each day—with or without the help of social media, text messaging, or movies and television. The images that appear to represent our daily experience are essentially mental.

Over a century and a half ago, Mary Baker Eddy recognized the role consciousness plays in determining experience, and she identified the importance of uncovering hidden mental images that are based on physical-sense concepts. In Science and Health with Key to the Scriptures she writes: “The mine knows naught of the emeralds within its rocks; the sea is ignorant of the gems within its caverns, of the corals, of its sharp reefs, of the tall ships that float on its bosom, or of the bodies which lie buried in its sands: yet these are all there. Do not suppose that any mental concept is gone because you do not think of it” (p. 87). 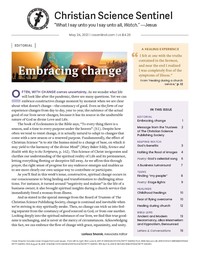