Jesus’ life was one demonstration of faith after another, based on his clear understanding of God, and he called for the same demonstration from his followers.

In the Book of John, we read about a nobleman who approached Christ Jesus and asked him to come to his home and heal his son, who was at the point of death (see 4:46–53). The nobleman, a government official, had likely traveled many miles, possibly all the way from Capernaum, to find Jesus. Of the two, the nobleman had the higher status, and yet he submitted to Jesus, showing humility and faith.

Jesus told the man to go on without him, and that his son was going to live. The man believed him. What faith! And on his way home, he met his servants coming to tell him that his son was indeed well. 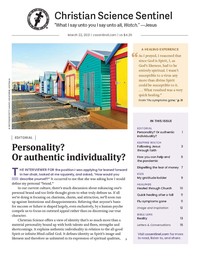