An academic fraud? No way!

Fear no longer had a grip on me during my college experience.

Several months ago, I watched a 2016 interview with American comedian Conan O’Brien conducted by the then-president of Harvard University, Dr. Drew Faust . O’Brien is an alumnus of Harvard, and when he spoke about his insecurities as a student there, it struck a chord with me. He said that although he’d received a good public high school education, he’d felt very insecure as a student and feared he might have made a mistake in going to the university he had chosen. Most of the students came from a social, economic, and educational background different than his, and he wondered if he really belonged there.

I, too, had been a good student in high school. But in making the transition to college, I felt lost. Like O’Brien, I believed I would be discovered as a fraud. It seemed possible that at any moment the professors would determine that I was not up to their academic standards, and I would be asked to leave. 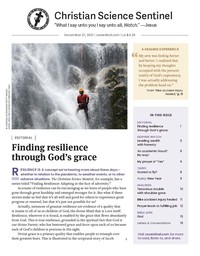