The last hundred pages of the textbook of Christian Science, Science and Health with Key to the Scriptures by Mary Baker Eddy, consist of what you might call thank-you notes to the book’s author. The chapter is titled “Fruitage,” and the people who wrote those notes represent a sampling of the vast number of people who have been “reformed and healed through the perusal or study of this book” (p. 600).

When you read these accounts, you might notice that the letter writers were all kinds of people with all kinds of problems from all over the United States and other English-speaking countries. (Science and Health has since been translated into many other languages, and is read in countries around the world.) Some were eager to read the book; some weren’t, at least initially. A few expected healing; most did not. Some read it out of curiosity, some out of genuine interest, some out of desperation. But they all read the whole book and were healed—naturally. What did all these individuals have in common that led to their healings?

Send a comment to the editors
NEXT IN THIS ISSUE
Article
Who can we trust? 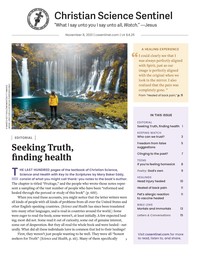