To many, the parable of the prodigal son is perhaps the most relatable of Christ Jesus’ parables in the Bible because of its compelling account of redemption, forgiveness, and grace (see Luke 15:11–32).

It’s a tale of two sons: an older son who stays home and a younger­—­the prodigal—who rebels by asking his father for his inheritance and leaving home for a “far country,” where he “wast[es] his substance” by living recklessly. After his resources run dry and a famine comes to that country, the young man hires himself out to a farmer to feed his pigs. Hungry, he longs to eat even the pods that the pigs eat, but he is not given even these. Eventually, seeing the error of his ways, he returns home to his father. But the older son, feeling he has led, by comparison, an exemplary life, is dismayed at the joyful reception given his brother. 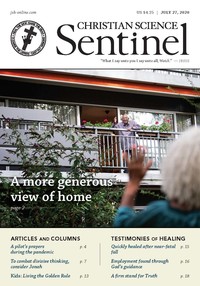