It was a dark and foggy day when Mary Baker Eddy was handed the first copy of the first issue of The Christian Science Monitor on November 25, 1908. Someone in her household remarked upon the weather. Mrs. Eddy’s quick response indicated she was looking beyond what the material senses were reporting. “Yes,” she said, “but only according to sense. We know the reverse of error is true. This, in truth, is the lightest day of all days. This is the day when our daily paper goes forth to lighten mankind” (Heather Vogel Frederick, Life at 400 Beacon Street, p. 329).

Send a comment to the editors
NEXT IN THIS ISSUE
Article
When in trouble, call “91” 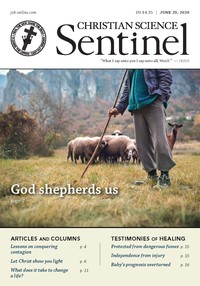