Years ago, I had a friend who was forced out of his home. He was jobless, homeless, afraid, and violently angry. One afternoon, I went to the motel where he was temporarily staying to take him some money. He was so angry at everyone. I talked to him for a while, gave him the money, and then went back to my car. He exploded in rage and followed me. As I was getting in the car, he slammed the car door on my leg, yelling, “I am going to break your leg!” I told him that he was a child of God and that this anger was not part of God’s man. He began swearing at me, telling me how much he hated me and wished I were dead. Suddenly, he let go of the door, and I pulled my leg inside. I started the car and began to drive away. Then I looked back at him, and thought of a similar situation Jesus had faced.

In the Bible (see Mark 5:1–15), we are given a sharp description of a man “who had his dwelling among the tombs; and no man could bind him, no, not with chains:… neither could any man tame him. And always, night and day, he was in the mountains, and in the tombs, crying, and cutting himself with stones.” But when he sees Jesus, something changes. The Bible records, “He ran and worshipped him.” After spending time with the Master, listening to what he was saying, the Scriptures tell us, the man was “clothed, and in his right mind.” 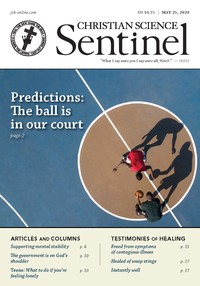