The lecturer, who is a Christian Science practitioner and teacher, told the girl about the first chapter of Genesis, which describes how God created everything and made it good. She then instructed the girl to see the llama as beautiful and perfect, as he was created by God. After a brief time, the child noticed that the llama was no longer coughing.

I thought about what the young girl was able to recognize so quickly. Rather than fearfully trying to determine the origin of the cough, how long it would last, or what to do if the cough got worse, the child saw only what was true about the llama—that he was already whole and good. Nothing needed to be added to him, and nothing needed to be taken away. He was already perfect.

I thought about a statement from Science and Health with Key to the Scriptures by Mary Baker Eddy that was shared in the lecture: “Stand porter at the door of thought. Admitting only such conclusions as you wish realized in bodily results, you will control yourself harmoniously” (p. 392). The lecturer had noted with a touch of humor that one could imagine a bouncer or sumo wrestler guarding the door of thought.

These insights were still in my mind the next day, when I received a text from the wife of a man who had been hired to oversee some work at our branch Church of Christ, Scientist. She said she hoped her husband hadn’t passed anything on to me, because he had been ill and we had been working in the same building. For a moment I visualized places in the church where contamination might have occurred. But as the image of a door flanked by a wrestler flashed into my thought, I had to laugh. I sat up in bed and asked God, “What do I need to know?” Immediately I heard the answer, “Accept.”

Right then it was clear that I had to do more than just shut out bad thoughts of inharmony, such as sickness. I had to admit good thoughts of man’s God-given spiritual wholeness and perfection. I could close the door on the false thought that someone could pass an illness to me, and accept the true thought that both the contractor and I were governed and surrounded only by good.

Suddenly I realized that the flu symptoms were gone. My next thought was that I felt like sweeping and mopping the floors. The fear that I wouldn’t be able to tackle the job after spending a couple of days in bed tried to sneak in, but I replaced it with the truth that God is all-powerful, and that as His image and likeness, I have all the strength I need. I cleaned for several hours and felt fine.

Late that night, my daughter surprised me by bringing over fried empanadas. The thought that I should break my two-day fast with something bland was quickly and happily discarded, and I enjoyed eating what she had thoughtfully provided, knowing it had no power to harm me. I looked forward to sharing my gratitude for this quick and complete healing at our church’s testimony meeting the next day.

When I arrived at church, I noticed the contractor was there attending the service, and he was coughing frequently. I recalled a sentence from that week’s Bible Lesson: “Evil thoughts, lusts, and malicious purposes cannot go forth, like wandering pollen, from one human mind to another, finding unsuspected lodgment, if virtue and truth build a strong defence” (Science and Health, pp. 234–235).

When I recognized that I was being distracted by how the contractor’s symptoms were lingering, I threw that thought away and replaced it with the awareness of what God knows about His child. Gauging the state of someone’s health based on what our ears hear or our eyes see is a mistake. The true idea of man as God’s spiritual reflection is always well, regardless of what the physical senses indicate.

The meeting began, and the readings, which were from the Bible and Science and Health, included several examples of how mistaken material perception is corrected with spiritual perception. I’m not sure when the coughing stopped, but toward the end of the service, when I spoke of my healing, all was harmonious.

My thanks to those who submit articles and testimonies for publication in the Christian Science periodicals, and to the editors who help them present their submissions most effectively. I’m also grateful for devoted Sunday School teachers, as well as Christian Science practitioners, teachers, and lecturers. Along with our pastor—the Bible and Science and Health—they provide invaluable help in learning more about God. 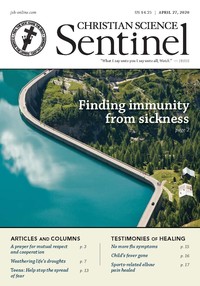