Hidden changes that bring sure renewal

At this time of year, many of us are thinking more deeply about Jesus’ stunning victory over the cross. Referring to his body, he had said, “Destroy this temple, and in three days I will raise it up” (John 2:19). I find it interesting that Jesus’ three days hidden away in his rock-hewn tomb after his crucifixion were so startlingly productive.

You can imagine how still and lifeless Jesus’ tomb must have appeared from the outside. The huge stone that had been rolled in front of it must have looked so final. But in Science and Health with Key to the Scriptures, Mary Baker Eddy explains, “His disciples believed Jesus to be dead while he was hidden in the sepulchre, whereas he was alive, demonstrating within the narrow tomb the power of Spirit to overrule mortal, material sense” (p. 44).

Send a comment to the editors
NEXT IN THIS ISSUE
Article
“Show me!” 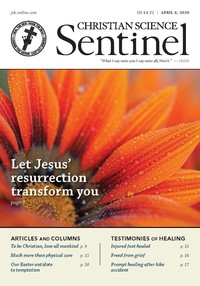