Freedom from alcohol use and chronic illness

During the 1960s period of the Vietnam War, I was a graduate student living with a group of other grad students and involved in political protests, wild parties, and frequent use of alcohol. We thought we were sophisticated, but we were actually hateful and cynical. Often, I would return from political protest marches filled with resentment toward society. This riled-up state of thought often caused me to get ill. In fact, I would frequently find myself at the campus health-care center with whatever symptoms my roommates had, as they often came down with the flu, mononucleosis, and pneumonia.

My parents were Christian Scientists and took me to the Christian Science Sunday School when I was young, but in college I drifted away from Christian Science and was no longer attending church or studying this Science. Eventually I got tired of being so frequently sick. I thought, Why not get back to the healthful lifestyle I had when living with my parents? 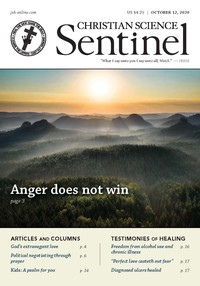