Originally appeared online in the teen series: Your Healings - June 18, 2019

I thought I knew what I was in for. Over school break, I visited my aunt, uncle, and cousins in a small town. I’d only stayed with them once before, and that time, I’d really enjoyed it. But that was five years earlier, and I had changed a lot from the carefree little kid I was then. I was now a much more aware teenager.

The first week did not go well, and I felt like I didn’t fit in at all. My relatives are not Christian Scientists, and they dealt with problems very differently than I did. This made me feel out of place. But what was even worse was that I was working with my aunt in the kitchen of a restaurant, and she spent a lot of time gossiping, which I tried to drown out by singing to myself in my head. By the end of the first week, I was fuming because I was going to be stuck with them for seven more days. I felt frustrated, disappointed, and like the whole situation was awkward.

I didn’t know what to do. I felt like I couldn’t talk to any of my friends about it, and I didn’t want to be immature and complain to my parents. After some debate, I decided to turn to Christian Science for help. In the past, I’d relied on Christian Science when I’d had other problems, and I had always found answers and healing as I’d prayed the way I had learned in Sunday School.

That Sunday afternoon, I sat in my room and prayed to see my family in a more loving way. I knew that my aunt, uncle, and cousins are God’s children, just as I am. He created all of us in His image, which meant that none of us are capable of expressing anything unlike God, such as ugly qualities. We each express only good qualities—like kindness, patience, understanding, and love—because God is good. After I prayed, I felt closer to God and more peaceful.

The next day, as I continued to pray with these ideas, I noticed two things. First, I realized that the way I was thinking about my relatives had changed. I felt more loving toward them, and more appreciative of the things that are good about them. I also noticed a change in their behavior. They were less judgmental and more respectful toward me and each other. Things were looking up! I ate dinner that night feeling much happier, and like God was right there. I also continued to keep my thoughts on this spiritual perspective rather than being critical the way I had been.

I sat in my room and prayed to see my family in a more loving way.

The second week, I began developing a relationship with my cousins. With my younger cousin, who is six years old, I watched movies and played with her toys. I also helped my older cousin with homework. It occurred to me that I could help out more around the house, so I did—which my aunt and uncle noticed and appreciated, and their attitude toward me seemed to change. Working with my aunt became easier, too. I found that I could interject something more positive if I didn’t agree with something she was saying, and she would actually listen.

I could hardly believe it, but by the end of the week, even though I was looking forward to going back to school, I was sad to leave my cousins! I had really connected with them. The whole family drove me back to school, and I had to say goodbye. I felt genuinely grateful as I thanked my aunt and uncle for being so hospitable and hugged my two cousins, saying that they could call or text whenever they needed anything. They all seemed so different from the people I’d been regretting visiting at the end of my first week, and I knew that was because of prayer.

I am so thankful for this experience. Not only did it teach me how important it is to get our information about others from God, but it also gave me an opportunity to seek God’s help on my own—and to find that it really was there. 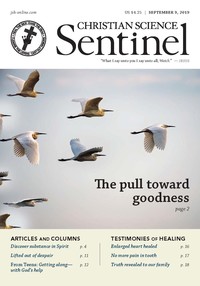