We are happy to announce the appointment by the Christian Science Board of Directors of Larissa Snorek, CSB, to the position of Associate Editor for the Journal, Sentinel, and Herald. She will succeed Kim Crooks Korinek, CSB, who has been working for the Christian Science periodicals with great love as an Associate Editor since the autumn of 2016. Kim has asked that her next step in serving Church be with her teaching and practice based in St. Paul/Minneapolis.

Lari began working for The Mother Church in 2002 in the Committee on Publication Office. Later, she served as Africa liaison for the International Service Department, spending a good part of five years in ten different countries in Africa. Most recently, she has been a member of the Christian Science Board of Lectureship. Lari’s approach to her work is well stated in an article she wrote for the Christian Science Sentinel: “Whenever I’ve made plans for my career, they’ve usually resulted in a completely different and unexpected opportunity that could have come only from sincere listening to God” (“Time to listen,” May 17, 2010). Lari began advertising in The Christian Science Journal as a Christian Science practitioner in 2010 and became a teacher of Christian Science in 2018. 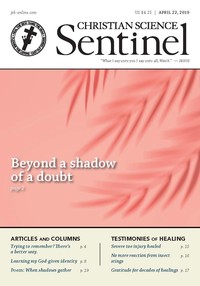