Chronic nightmares were something that had haunted my sleep for as long as I could remember. They were not a nightly occurrence, but I could not remember a week passing when I did not wake in the middle of the night because of terrorizing images or sounds. These nightmares had become such a habit that they felt like part of my identity. Until I decided to take Christian Science Primary class instruction.

During the class, I immersed myself in the study of the Christian Science textbook, Science and Health with Key to the Scriptures by Mary Baker Eddy, and the Bible. But in the first week of instruction, the nightmares began to happen nightly, even several times a night. I struggled for a couple of days, but it began to affect my study, and I finally wanted to confront this issue. It was not going to stand between me and my study of God! 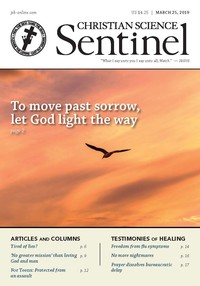