In September 2015, the car I was driving was hit in front of the driver’s door by a large pickup truck. I was taken to the hospital, where X-rays showed that no bones were broken. However, my left thighbone was deeply bruised, and the doctor said it would take about three months to heal.

During the following months, I occasionally prayed for healing, but mostly just waited for the bruise and discomfort to go away. But more than two years later that thigh was still painful, especially when I lay on my left side. 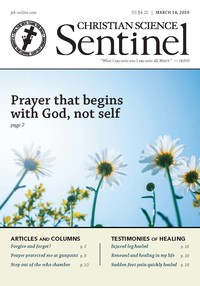