I work as a senior advisor to several different account teams at a marketing communications boutique. One of my teams had worked together congenially for a year when, out of the blue, a team member began to act hostilely toward me. What began as subtle snubs escalated to chronic verbal bullying. Our small company has no human resources department where one can file a formal complaint. As unsettling as the situation was, however, I felt confident it could be resolved through prayer, since I’ve witnessed many healings of discordant relationships over a lifetime of studying and practicing Christian Science.

I called a Christian Science practitioner for prayerful treatment to support my own prayers, and she assured me that my only responsibility at work was to love. This might sound like a radical idea, given the circumstances. It was my responsibility to love someone who was acting so unkindly toward me? But I knew from my study of the Bible that this idea was based on Christ Jesus’ teachings, including, “Love your enemies” (Matthew 5:44). This would be difficult if it meant that I had to muster up this love myself, or that I needed to love another’s unloving behavior. It would also seem impossible if it meant dismissing my colleague’s actions or making excuses for the behavior. But from my study of Christian Science, I knew it didn’t mean any of these things.

Send a comment to the editors
NEXT IN THIS ISSUE
Article
Witchcraft: No match for God’s power 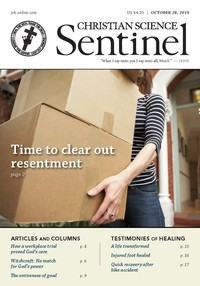