That’s what I would have said if you’d told me I’d choose to stop drinking back when I was drinking on pretty much a daily basis. I also probably would have laughed.

From the time I was around seventeen, drinking was a big part of my life. It started as an every-now-and-then thing, but it wasn’t long before I was binge drinking nearly every day and had fallen away from Christian Science—and even from being interested in spirituality. I thought alcohol gave me confidence and deeper relationships with my friends who also drank—and also that my life would be pretty boring without it.

So you can imagine my shock when I found myself among a group of Christian Scientists my age and noticed how genuinely happy they were. How could they be so open with each other, have such deep relationships, and even have a good time, without alcohol?

Something clicked for me in that moment. I’d thought I was pretty happy overall, but when I saw this pure joy that these friends were experiencing, it became so obvious that my happiness was surface-level and fleeting. And I realized that the deeper, more permanent happiness I’d been looking for wasn’t something I could get from drinking; it comes from God.

Having had a taste of the blessings that come from focusing on God, I wanted more, and this desire far outweighed the desire to drink. So, I decided to stop. But I was concerned about how my drinking friends would react and whether they’d feel uncomfortable. I was also worried they would think I’d been dishonest with them by hiding a big part of my life. They knew I believed in God, but whenever they asked me about my religion, I would always act like it wasn’t important to me.

My friends and I met most weekends at a local pub, but I decided not to go back until I felt really peaceful about my decision. In the meantime, I was studying Science and Health with Key to the Scriptures by Mary Baker Eddy and getting a deeper understanding of God. I knew I was ready to meet them again when I was no longer afraid of the outcome. I had complete trust that God was with me and that He would be guiding me to say the right thing. I also reasoned that whether or not my friends still wanted to hang out, God’s goodness would always be with me—and with my friends. The fear I’d initially felt was replaced by excitement to see what would happen.

I arrived at the pub and went to the bar to order a soft drink. The barman asked for my ID—which I hadn’t brought, because I knew I wouldn’t be drinking. I’d completely forgotten that I needed my ID even to be in the pub. When the bar staff asked me to leave, there was nothing to do but explain the situation to my friends. I actually told them that the reason I hadn’t brought my ID was that I wasn’t going to drink anymore. Then I wished them a good night and said I’d see them next week.

I got in the car to drive home, and as I did, I heard a tap on my window. My friends had run out after me! They said they didn’t need to drink that evening either and offered to go back to one of my friends’ houses instead. It was a really lovely night, and I was able to explain a bit more about the reasons behind my decision.

To my surprise and relief, my choice not to drink never negatively impacted the dynamic of the group. In fact, getting together without alcohol became a regular part of our social activity, and often, friends would thank me for not drinking because it gave them confidence to do the same.

I can’t say I never felt tempted to drink again. But there is a chapter in the Bible that has really helped me over the years. For quite a few months I read it every night before I went out with my friends. Part of it reads, “Ye are all the children of light, and the children of the day: we are not of the night, nor of darkness. Therefore let us not sleep, as do others; but let us watch and be sober. For they that sleep sleep in the night; and they that be drunken are drunken in the night. But let us, who are of the day, be sober, putting on the breastplate of faith and love; and for an helmet, the hope of salvation” (I Thessalonians 5:5–8). These verses helped me realize that being sober isn’t a passive act of not drinking but is active; it means keeping your thoughts clear and full of love, peace, and joy. This form of “active” soberness meant that I always had a good time.

I went from thinking I’d be missing out if I didn’t drink to feeling so secure in the fact that I’m not missing out on anything. I’ve learned that all the good things I had thought I was finding in alcohol were not actually there, but can be found in any situation simply by recognizing that they actually come from God and so must always be present, since God is ever present.

My decision to stop drinking wasn’t so much about cutting something out of my life as it was letting in something so much more joyful and fulfilling. Today, the relationships I have with my friends are deeper, and my life is so much more interesting and fruitful than I ever could have imagined. 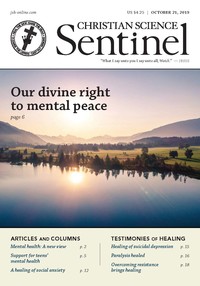