Some years ago, during supper one evening I began feeling very dizzy. I soon became nauseous as well and had to lie down. I was unable to pray effectively for myself, so I called a Christian Science practitioner, which eased my fear. Still, the condition lasted two full days before I was able to function normally again.

Once well again, I dismissed this baffling condition from thought … until the following year, when it occurred again. After that, it began occurring more and more frequently, until I was never quite free of it.

Send a comment to the editors
NEXT IN THIS ISSUE
Poem
Good news! 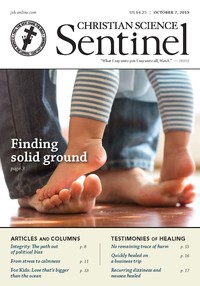