In the wake of shootings in the US and other similar tragedies, there has been a backlash across social media against individuals using the hashtag #thoughtsandprayers. Many see “thoughts and prayers” as empty words that mean nothing when it comes to creating real reform. The backlash has saddened me, even though I understand the frustration at the lack of action directed toward preventing these situations from happening again. But, as a person who prays, and who relies on prayer whenever challenges come up (whether in my life or in the world), I have never felt prayer to be passive. So, at the time this backlash became apparent, I realized that this was an opportunity to expand the understanding of prayer, to show that it really has nothing to do with inactivity or passivity, but can produce very tangible results. It was also a call to action to dig deeper to ensure that my own prayers weren’t simply empty words.

For me, prayer is not about petitioning a far-off God in the hope that we will find favor with Him, and He will give us what we want. Prayer is limited when it’s focused mainly on personal benefit. Instead of approaching it with the goal of gaining something for ourselves, we should allow prayer to lead us naturally to a deeper and more expansive love that includes everyone. This actually requires a lot from us, because it requires us to let go of human will and our own personal agenda, and yield to the path God is moving us to take. 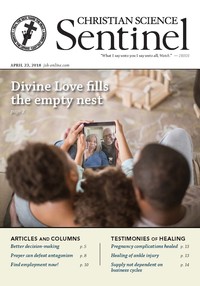