Adapted from an article published in The Christian Science Monitor, February 23, 2017.

After vandals damaged nearly 200 tombstones in a Jewish cemetery near St. Louis, Missouri, in February, it wasn’t only Jews who rose up to denounce the act of hate. Muslim groups helped raise more than $120,000 to repair the damage and offered a reward to catch those responsible. Some 2,000 people—Jews, Christians, and Muslims—helped clean up the mess. And then they held a multifaith prayer vigil.

What’s most remarkable is that local Jewish groups said the response, while extraordinary, was not surprising. People of different faiths around St. Louis have often lent support to each other during a crisis. Rather than define themselves solely by their religion, they recognize the bonds of love that mark the basis for the three Abrahamic faiths. 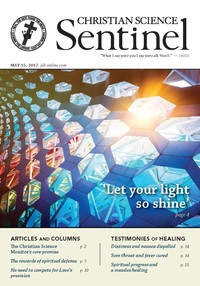