Healing of back pain

Originally written in French, this first appeared in the March 2017 Portuguese, Spanish, French, and German editions of The Herald of Christian Science.

One morning during the first part of 2015, I felt a pain in my back, but it didn’t bother me the rest of the day. At nightfall, however, the pain became more intense, and I started to pray, giving myself treatment as I’ve learned to do in studying Christian Science. After three days of this treatment, the pain hadn’t diminished and felt even more real.

In the Bible, it says, “He that is our God is the God of salvation” (Psalms 68:20) and “The Lord is nigh unto all them that call upon him, to all that call upon him in truth” (Psalms 145:18). Fortified by these statements, I continued my metaphysical treatment with conviction and humility, knowing, as Mary Baker Eddy explains in the Christian Science textbook, Science and Health with Key to the Scriptures, that “in Science man is the offspring of Spirit. The beautiful, good, and pure constitute his ancestry.… Spirit is his primitive and ultimate source of being; God is his Father, and Life is the law of his being” (p. 63). 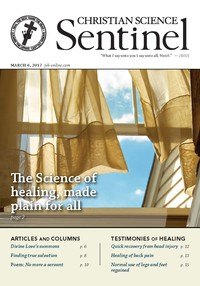