The pain was gone

Originally written in Spanish, this first appeared in the September 2016 French, Portuguese, Spanish, and German editions of The Herald of Christian Science.

I practice a sport called “paddle,” which is similar to tennis. The difference is that the court is enclosed, and it’s typically played in doubles.

One day, I began having pain in my right arm while practicing this sport. So I began to pray, declaring that God made me in His image and likeness. However, the healing wasn’t coming, and the arm was increasingly painful while I played.

Send a comment to the editors
NEXT IN THIS ISSUE
Image and Inspiration
'A glorious day is dawning...' 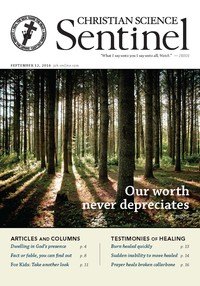