Praying together about the Orlando shooting

One thought. That was all I could hold on to. And it wasn’t even a particularly inspired thought. To be honest, the only thing I could think was, “No.”

I wasn’t facing terrorists, but I was battling what felt like my own personal terrorism: a painful skin condition that seemed to be raging out of control. After weeks of praying with no change, I felt frightened and helpless. Would this ever end?

Send a comment to the editors
NEXT IN THIS ISSUE
Bible Lens
Bible Lens—July 18–24, 2016 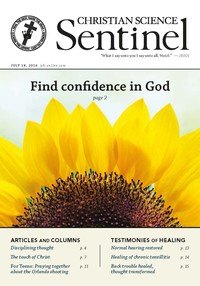