From soloist to student of Christian Science

For years as a child I had attended the Church of England, and had been to classes and confirmed. However, I became disillusioned with the religion, and I fell away from going to church for many years.

During my musical studies, a singing teacher suggested that I see if a Christian Science church had a vacancy for a soloist. As it happened, there was a vacancy in the local Church of Christ, Scientist. I applied and was hired. However, I decided that I was not going to be drawn into the religion, although I knew nothing at all about it. During the services I mentally tuned out, planned menus, and thought of other things to deliberately block out the ideas being shared. 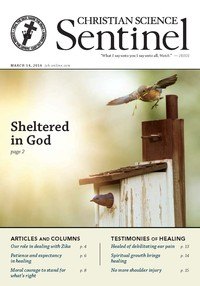