A journey illumined by love

I attended a Church of Christ, Scientist, for the first time on a Wednesday night, for a testimony meeting, and the atmosphere of love that I felt during the service was indescribable. That year I had the joy of attending Sunday School, the next year I joined The Mother Church, and the year after that I joined the branch church in Jakarta, my hometown. Soon, I attended a youth meeting in Boston at The Mother Church, and after that I took Primary class instruction in Christian Science. 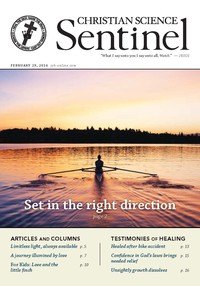