God’s constant protection in my life

My cousin and I were brought up in a family that relied on Christian Science. After a recent church meeting, my cousin remarked that I must have had many healings as a child, as he certainly had had. I thought about this later and realized that, yes, I’d had physical healings, but my strongest memory is one of protection. The conviction that I was cared for by my loving Father-Mother God was consistently present and encouraged by my parents. I developed a reliance on God that brought many examples of protection.

I recall one occasion from my early 20s. I was driving a short distance to my grandmother’s house. My car had trouble, but I was able to pull over to the shoulder. My brother had set off separately for my grandmother’s house, and I knew he would be there already. I couldn’t call him because this was in a time before mobile phones. I realized that he would come and look for me, but it might be a long wait. 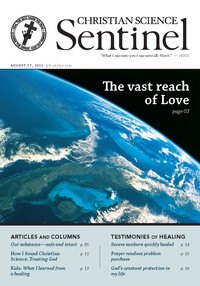