The Bible on my desk

Students of Christian Science love the Bible, especially since the writings of Mary Baker Eddy, the Discoverer and Founder of Christian Science, are based on its inspired Word. It would not be unusual to enter a Christian Scientist’s home and find multiple copies of the King James Version of the Bible, along with other scholarly translations, Bible dictionaries, and commentaries. Christian Science Reading Rooms are generally well-stocked with these resources too. I, myself, keep a Bible on my bedside table, and I even have friends who keep copies in their cars.

Mrs. Eddy’s biographers note that in addition to her extensive and deep study of the Scriptures from Genesis to Revelation, she often opened the Bible spontaneously to find a passage that would guide her as to how to meet an immediate need. When sharing her grand discovery with mankind, she said: “The Bible has been my only authority. I have had no other guide in ‘the straight and narrow way’ of Truth” (Science and Health with Key to the Scriptures, p. 126). 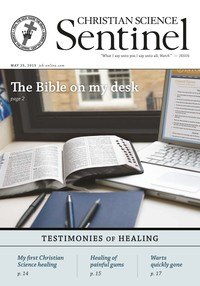