Originally written in Portuguese, this testimony first appeared in the April 2015 Portuguese, Spanish, French, and German editions of The Herald of Christian Science.

I found Christian Science almost 20 years ago. Little by little I started to study the Christian Science Bible Lesson, which consists of passages from the Bible and Science and Health with Key to the Scriptures, by Mary Baker Eddy. I began to have physical healings and to find solutions to problems related to, among other things, finding adequate home and supply. I also began to attend more regularly the religious services at a Christian Science group in Luanda, Angola, which today is Second Church of Christ, Scientist, Luanda.

Around that time I had a healing that was very significant to me. Back then I still drank alcoholic beverages, and one Saturday I had spent a lot of time drinking with friends. It was the middle of the rainy season, and there were many puddles on the streets, some of them wide and somewhat deep. In order to cross them, people would walk on blocks made of concrete that were put in the puddles. 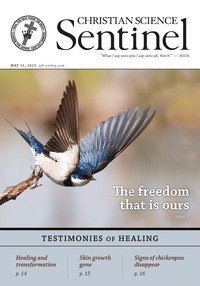