Sometimes Christian Scientists find themselves facing a difficulty that doesn’t yield readily to their prayer. It’s tempting to be discouraged when earnest prayer seems to have no result. But every time we apply the spiritual laws that truly govern our existence, it has a healing effect, whether it’s initially visible on the surface or not. Confidently persisting in the truth despite evidence to the contrary brings us closer to understanding God’s infinite presence and goodness, until we finally see the proof of it in our lives.

I had an interesting lesson along this line some years ago when we hired a company to put a window in one of the basement walls along the back of our house. The workmen brought a large circular saw and began to cut a hole three feet high and four feet wide. This took them a couple of hours, because the cement was a foot thick and very dense. Finally, they came into the house with their sledgehammers and knocked the massive block of cement out onto the ground. The house shook as if there had been an earthquake. 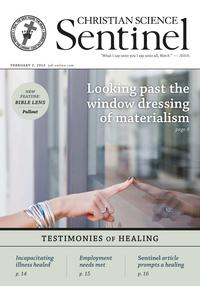