An end to illness

Originally written in Portuguese, this testimony first appeared in the May 2014 Portuguese, Spanish, French, and German editions of The Herald of Christian Science.

On a Monday at the beginning of 2012, I was at work when I started to feel unwell. When I got home, I felt as if I had a fever. I also coughed, had pain in my chest area, and felt weak. I lay down, and as I was trying to read Christian Science literature and pray, I fell asleep.

The next morning, I didn’t feel well at all and wasn’t able to go to work. My wife, who is not a student of Christian Science, wanted to give me medicine before she left for work, but I declined to take any. Because I have been studying Christian Science for some time and have found it to be effective, my first choice is to rely on prayer to find healing. 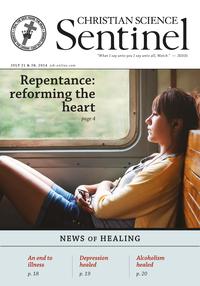