The Bible: A fresh fountain

Although it is quite an old book, to me the Bible continues to be a fresh fountain! Again and again, I come across passages that—although I may have read them many times—suddenly seem quite new, bringing me a lot of inspiration.

Here is one example: In First Kings we read how God told the prophet Elijah to go to the town of Zarephath, where a widow would care for him during the upcoming famine. Elijah did what God told him. During the time he lived there, the son of his hostess became very sick and died. His mother, of course, was beside herself with grief and reproached the man of God, thinking he had killed her son as retribution for her sins. Elijah simply said, “Give me thy son.” He carried the boy in his arms “up into a loft, where he abode, and laid him upon his own bed. ... And he stretched himself upon the child three times, and cried unto the Lord” (see I Kings 17:17–24). The child was restored to life.

Send a comment to the editors
NEXT IN THIS ISSUE
Article
Good purpose for all ... even mosquitoes? 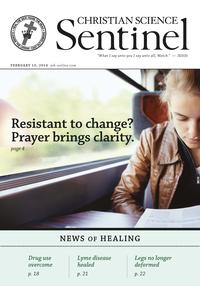