Originally written in Spanish, this first appeared as an article in the November 2013 Spanish, French, German, and Portuguese editions of The Herald of Christian Science.

One day I went on foot to meet my older sister at work so we could walk home together. I was waiting for her outside her building when a young man, apparently on drugs, passed by me. He then turned back and walked by me again. He did that twice, and on the third pass, he stopped next to me and tried to molest me. We struggled briefly, and I became afraid.

But I immediately remembered what I had learned in the Christian Science Sunday School about man being spiritual, and I began to pray. In Science and Health with Key to the Scriptures, Mary Baker Eddy writes: “Man is spiritual and perfect; … He is the compound idea of God, including all right ideas; ...” (p. 475). 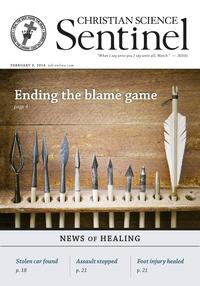