About a year ago, I had been working on my computer late into the evening when I suddenly felt symptoms of dizziness and nausea. My daughter-in-law and I were working in separate parts of the house. Both of our husbands were out of town, so it was just the two of us. I tried to make my way to the bathroom but collapsed on the floor of my bedroom on the way. I realized I needed immediate help from my daughter-in-law, who is a Christian Science practitioner, and I crawled to the phone next to the bed and called her.

She soon found me in the darkened room and immediately began to pray. At once I felt her spiritual strength and clarity, and I knew that God was all around me. I was not able to get up off the floor, and my daughter-in-law couldn’t lift me, so I crawled to the bathroom. The symptoms were severe, and I faded in and out of consciousness. At one point I heard her say, “I am not impressed!” I almost felt that I was looking down on the scene apart from my body, and I remember smiling to myself, knowing that this statement was my daughter-in-law’s refusal to accept the picture of my body going through symptoms of illness. She was rejecting the attack as being anything that God had made. 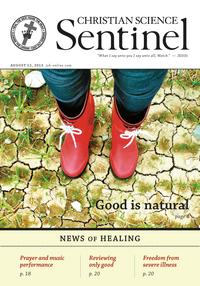