Logic and love of Christian healing

One day several years ago, I began to feel a persistent pain in my chest. Though I was concerned, I hoped that it would just dissolve quickly so I could go about my business as usual. But it didn’t. I began feeling weak and not able to move with normal freedom. When I went to sleep at night, I found I had to sleep in a certain position on my back.

It was only through prayer that I was able to resist the pull of fear. I regularly declared to myself, silently, both during the day and before I went to sleep, that I was spiritual: I was the expression of God, Spirit. And that meant nothing unlike Spirit could be a part of my being. One statement from Science and Health with Key to the Scriptures by Mary Baker Eddy came to me as a corollary to this foundational truth: “A spiritual idea has not a single element of error, and this truth removes properly whatever is offensive” (p. 463). 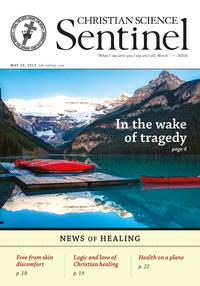