Originally written in French, this testimony appears in the October 2013 French, German, Portuguese, and Spanish editions of The Herald of Christian Science.

One Monday evening in June 2012, as I came home from work, I felt very cold and weak. The next morning, I still did not feel well but went to work nevertheless. Around 10:00 a.m., I noticed red spots on my face and arms. My colleagues started to notice and asked me to go home. When I got home, my brother arrived, showing the same symptoms as mine. He had also left work and had stopped at a pharmacy. Having been told that he had the chickenpox, he’d bought some medicines recommended for treating his symptoms.

As for me, I decided to put into practice the teachings of Christ Jesus as explained by Christian Science, where prayer alone brings healing. In the Gospel of John, Jesus said, “He that believeth on me, the works that I do shall he do also” (14:12). 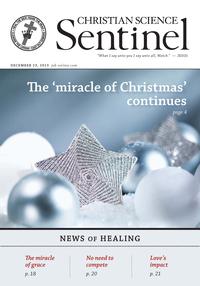